El Año Viejo is a common year-end tradition in Colombia and other countries in Latin America. On December 31st, everyone gets excited about the New Year and its obligatory resolutions for change. Años Viejos are used in many places to symbolically leave behind bad things from the previous year. Traditionally, this involved burning effigies full of firecrackers or pockets of gunpowder, but for safety reasons, the practice has evolved into something less spectacular but no less important. Below you can find a video of how intense and exciting this celebration can be.


The Año Viejo is now crafted as a small doll in a tin. People take small pieces of paper and write all the bad things that have happened during the year. They then burn them and the doll in the tin as a symbol of renewal.

Some towns in Colombia and Ecuador host daylight parades on December 31st to show the effort and artistic talent that has been put into making the doll before it gets burned in the middle of the night.

There is a song about not forgetting the “Año Viejo” and being grateful for the great things in life. This song was composed by Cresencio Salcedo, a Colombian songwriter and made famous by Mexican singer Tony Camargo. The song is played all over Latin America during the December celebrations and and has been danced to for over 60 years! Below is a video of the original singer who never got to meet the writer of the song.

This is one of those traditions you can easily share with your students. Have them decorate their Año Viejo and have them think about what they would like to do in the future. I have a simple and fun activity where students put together their own paper “Año Viejo” and write about their goals for the new year. This resource is available on Teachers Pay Teachers. Please note that this activity doesn’t include an “Año viejo” doll. 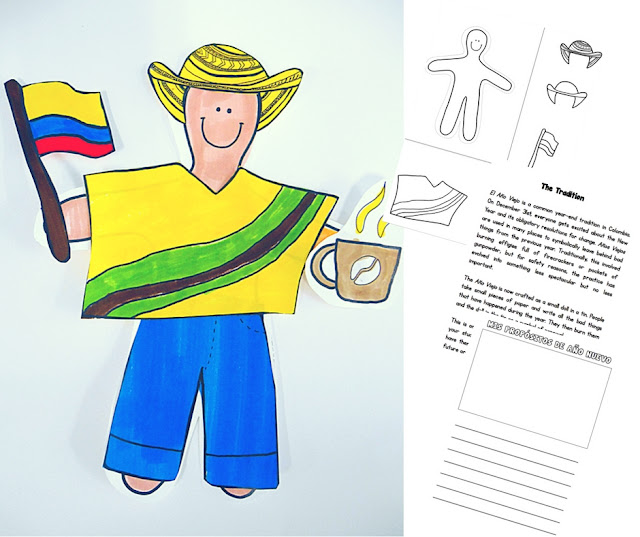