TALKING ABOUT “DÍA DE MUERTOS” IN YOUR SPANISH CLASS 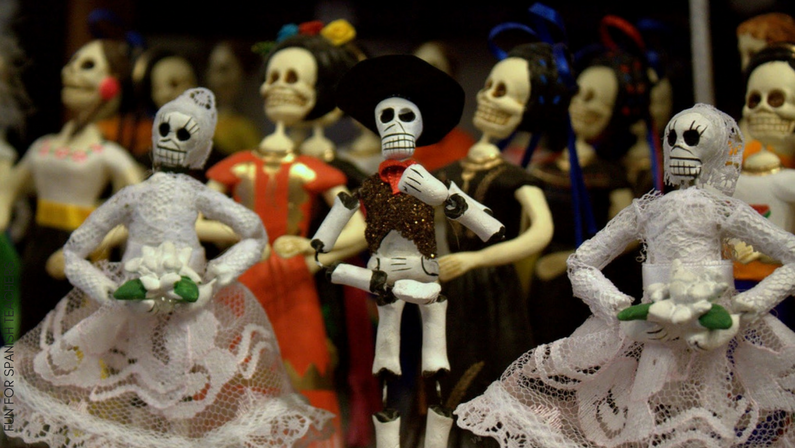 Día de Muertos is widely celebrated in Mexico and Guatemala as well as in other countries in Latin America.  It is a very important celebration meant to remember family members and friends who have passed away and are not with us anymore in this world. It is generally a very happy and colorful event that involves a lot of art, food, music, and most importantly, time with family and friends.
In Mexico, the holiday is celebrated over the course of three days that coincide with Halloween. Many cultural historians have noted that Día de Muertos is a Mexican form of the Catholic All Saints’ Day, and it thus mixes European and indigenous roots, a particularly rich feature of Mexico and Latin America in general (mixing of traditions). This is a great opportunity to let our children know that, while it’s a colorful holiday complete with skeleton characters, it is not something that should be simply equated with “Mexican Halloween.” Perhaps it can serve as a chance to point out similarities and differences between things, a kind of early opportunity to explore comparisons and contrasts in a formal way in the classroom and to encourage families to do the same at the dinner table or in the car.
November 1st is the most important day to celebrate in Guatemala and it is known by the Catholic name as El Día de Todos los Santos. The Guatemalan celebration is also filled with joy and in towns like Santiago Sacatepequez, where it includes flying big kites that represent a way to communicate and be in contact with the dead.
Here is a short song that by the Scherzo band from Querétaro, México.
Al sonar las doce de la noche Las calaveras salen a pasear,Muy contentas se suben a su coche En bicicleta y también a patinar. Tumba, tumba, tumba vacía Ciérrate ya que viene la fría,Jajaja que risa me da,Jajaja no me alcanzará.
Have fun sharing with your students!
Carolina

Jamboard is an amazing tool to create online inter

Los elefantes is a song I’ve always loved, not o

Thanks to @solbookbox for these amazing books! ¡E

☃️ This is a quick game called “A mi tambié

This is a no prep activity! You only need a few se

Last week in my classes we talked about different

I love sharing with my students about the Año vie